I was taking a picture of the cute cowgirls' butts and Craig is in the picture! 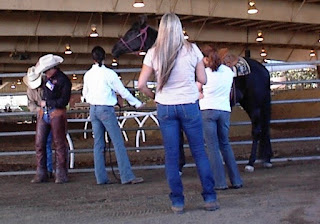 This was one of the Fresians from the Breed demo. A very handsome horse and one of the pictures that came out in the weird light. 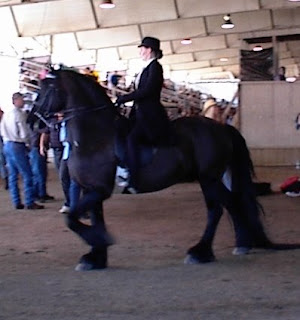 I looking at the preview, I don't know how these pictures will look when I actually post them. 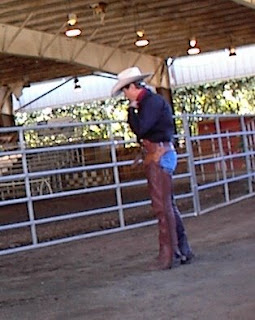 This should be the racetrack. 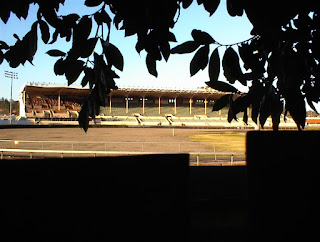 Now blogger is acting up. Not sure how my internet is. I told them I would be there around noon so I better get ready anyway. Another beautiful day in California... 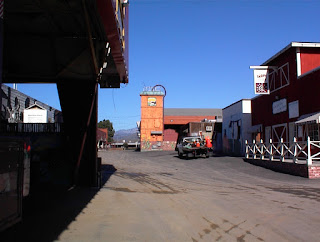 So, Yesterday was pretty long. I was up around 5:30 had breakfast at Denny's (C+), and was at the Fairplex about 7:15. They weren't going to let in anyone until 8 and since I wasn't a volunteer or a paid staff, I decided to try and talk my way past the guards. It worked. I invoked my supervisor's name and said I had to get to 9A to put up the barricades for the ECR mounds and they let me in.

I really had to do that, so I went to 9A (here are the mounds) and after doing that went behind the arena to get some shots of the horses on the race track. Here our our jumps. 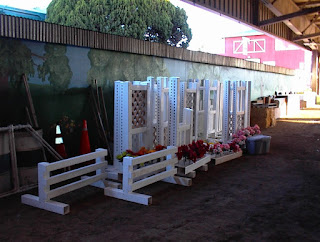 Here is one shot of the exercise riders. It was pretty cool. 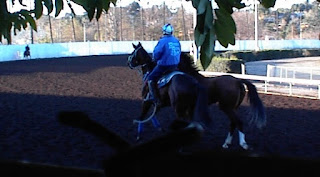 My first chore was putting out a fire (crisis) at the blue gate. Someone had stacked 80 boxes of programs in front of an electrical panel. I was the only one there. That took about 20 minutes. The rest of the morning we moved some props for the two arenas, helped move some horses in and out of the breed pavillion. I saw Julie Goodnight, Craig and Chris Cox with his new baby. She is a cutie. 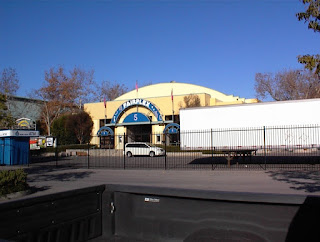 Well, this morning started at 5am. I was on the road at 6 and hit traffic about 7:30. I was a little apprehensive about going since I was taken off the "paid volunteer" list. The weather is absolutely amazing. Clear blue skies and 75 degrees.

I arrived at the Fairplex at 8:45 and thank goodness they weren't charging for parking. I worked my way to the information booth and they helped me find Bo who was the guy I've been working with for the last three years and the one who recommend I be hired. He was glad to see me. It seems there is a major storm in Ohio and about eight people were stuck at airports that were closed. He thought that I might get reinstated, which boosted my spirits. We worked through the morning setting things up for the clinicians and the Extreme Cowboy Race. We also had to set up some of the stages and stalls for the breed pavillion.

He inivited me to the adjoining hotel (where I would have been staying had I been getting paid) for lunch. I chowed down. A couple of people wondered who I was. I met the boss of EA. I got an "aloof" vibe from her.

The afternoon was busy unloading jumps and round pen panels, putting up banners, and laying down roofing paper for the horses to walk on without slipping. I thought over the course of the day I had found some resourceful solutions to some of the set-up situations and was feeling pretty good about my position. Around 3PM there was an annoucement over the walkie talkies that a staff meeting was at eight pm in the dinner hall. I asked Bo if I should go to that and he said yes. We worked until 7:30 putting up the last banners and the call came down that staff should get to the dinner hall to eat and meet. Dinner was only available until 8PM. I was hungry. As we were walking out, Bo told me that he was working on getting me in, but that as of now, meals and the meeting were only for paid staff.

By now I'm used to it. I don't know why, but I enjoy the setting up and working behind the scenes. I told Bo don't worry about it, I was here and I'll do whatever they want. So, I'm back at MY hotel. They have wireless. I thought I'd brought the cable to upload the pictures from my good camera, but I didn't. Only the one for the cheap camera. (Which is surprising, because I brought just about everything else I own.) Anyway it's 10pm. The first clinician is Julie Goodnight at 9am.

Since being invited last August 25th to work at Equine Affair, I've worked hard to get ready for the event. I'm set to go early Tuesday morning and I receive this email three days before leaving:

I hope this email finds you well. I apologize for this news coming to you so late and right before the event. I have just been informed that after finalizing the clinic prop lists and with other contributing factors that our needs have changed and we will not require your assistance during the event. If you choose to come on a voluntary basis and assist in needed areas as a volunteer we would be more than happy to have you help in that capacity.

Again, I apologize John; I have been out of the office all week and just received the news. I would like to see if I can offer you and your wife a set of four day passes so you can both attend. I will be in touch regarding this; It is the least I can do for the inconvenience.


Times are tough and I know the the laws of the jungle,"The new guy always gets the ax", but they could have handled it more professionally. I'm still going down on Wednesday and staying til Sunday. What am I going to do? Everything is set.

A Lovely Day In The Golden State 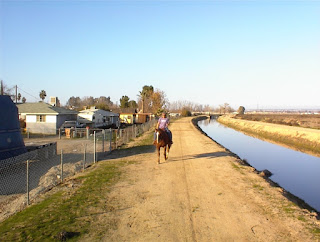 It was unseasonably warm over the weekend. I managed to work through Saturday and got the majority of the tree pruning done. Ranae was over on the coast visiting a friend and by the time she got home on Sunday afternoon it was quite toasty for a January day. 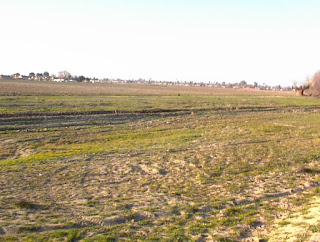 We cleaned up the horses, did a little ground work and headed out for a loop around the canal. There's a hawk sitting in the middle of the field above, but my cheap little camera didn't get a very good shot. There were sheep in another field. They not only look funny they smell funny, too. Last time we tried this, (the sheep are on the alfalfa fields once a year) Dusty kinda freaked out. Jessie was nervous but she kept moving and Dusty followed along. I told Ranae the plot of a movie I watched while she was gone, more to keep my mind off of Jessie's nervousness of the sheep. That worked well. 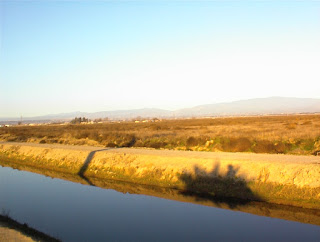 The farrier came by this morning at 7:30. I had gotten up early to do some lungeing. Jessie did "okay" she really fidgets while he's doing her front feet. We'll just keep working on it.

First Ride of the Year

Sunday was cool (I hesitate to use the word cold in deference to other areas of the country), but clear and, after only being able to do a little groundwork Saturday afternoon, we finally got to saddle up and ride.

We went out and around to the backside of the canal which requires riding on the road for about 1/2 a mile. Both horses stayed cool and calm as we went around traffic. Once out there we trotted for about half a mile to get them warmed up and then we walked for about a quarter mile. Ranae went ahead and was doing circles about 30 yards ahead and I squeezed Jessie to go into a trot. She just dropped her head and gave a little crow-hop. Surprised, I flexed her to a stop and yielded her hindquarters and asked again. Again, I got this little buck/crow-hop. I looked at her feet and felt the cinch. I couldn't find anything wrong so we walked off. Who knows? I think she was a)itchy from her long hair, b) upset because she had a saddle and cinch on, or c) just being a horse. Anyway, she wasn't really trying to get me off or, if she was, she wasn't trying very hard.

Both horses were stumbling a lot. The farrier comes next week. We did a little more trotting and we did a few short lopes. I worked on some bending circles at the walk and vertical collection. We probably rode three or four miles over 90 minutes, so it wasn't too taxing on them. She tried one more little crow-hop. It seemed uncharacteristic.

It was good to get out because I think the rest of this month's weekends are pretty full. I have to do some tree-trimming at the house next weekend (an annual two-day chore). The following weekend I get ready to head to Equine Affaire for a week so that weekend is shot too. The good news is that after the layoff the days will be long enough that I can start back on the Monday & Friday morning workouts. (The moon was almost bright enough to work this morning.)
Posted by John Harrer at 1/12/2009 03:53:00 PM No comments: Links to this post

Here are some pics from Christmas day. The weather was blustery and every once in awhile the horse would kick up. 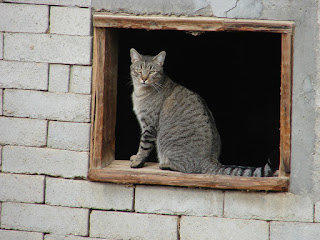 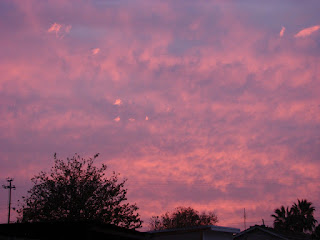 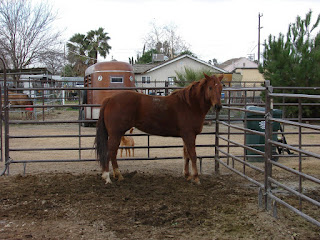 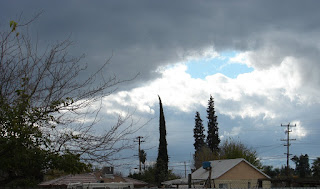 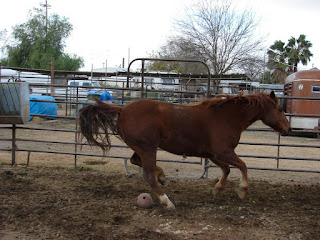 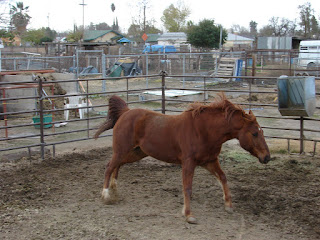 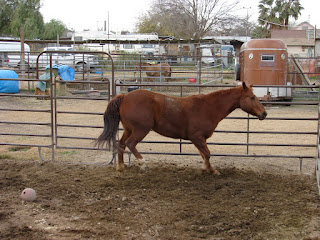 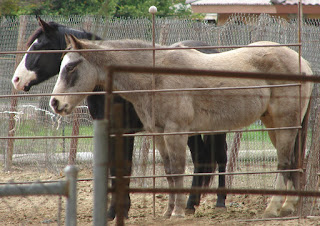 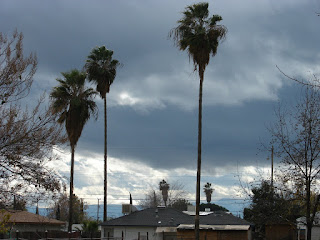 We (Jessie and I) did get some riding in on New Year's Day. My doctor's visit didn't turn up anything obviously wrong which is kinda good news/bad news. Anyway, it felt like it had been a long, long time since I was up on her and it had been five weeks. We did some groundwork and it was a cold forty degrees and gray (yes, I know, we Californians are sissys). She kicked up a on the LFR II. We were in a smaller area and all the other horses were around the fence. I got the feeling she resented having to work when no one else did. We worked our way through it and then I saddled her up. We didn't do much. Loped a few circles, trotted, stopped. Yielded hindquarters, side-passing, and bending. She did all these very well. Her lope was good and her stops were very nice. It felt good to ride her even though I had on five layers of clothing ;>)
Posted by John Harrer at 1/02/2009 04:16:00 PM 6 comments: Links to this post