But here is our new trailer. We bought it from someone moving to Florida. We think it was a pretty good value. It's big. It's 7'6" tall. It's the only used trailer I've actually been able to make an offer on in the last three months. All the others sold very quickly. We got it on Saturday and spent a good portion of the weekend cleaning it up and getting our old one ready to sell.

It is soooo much taller than our other trailer that we actually creased the top of it with one of the two trees we have to negotiate in our front yard. We were so focused on getting it through the gate, neither one of us looked up. We are such knuckleheads.

Anyway we will be styling it up to the Matt Sheridan clinic in June. The doctor says my problem is not cancer and won't kill me (good news), but time is the only fix. He said I could ride, so we'll see what happens. We rode three times over the long weekend. I'm a little sore. Jessie did well. Three weeks until the clinic... 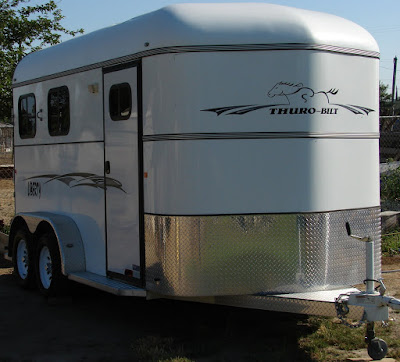 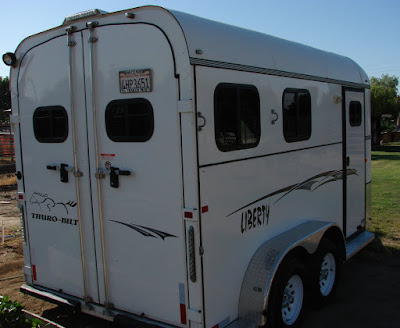 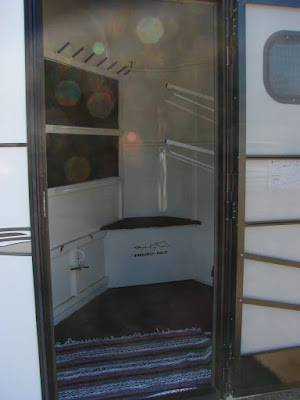 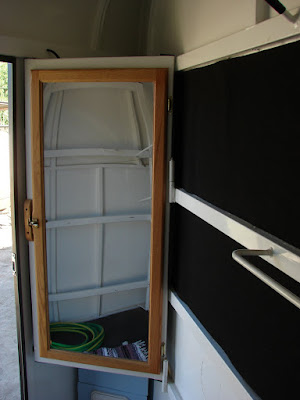 We went up to Tehachapi last weekend to check out Matt Sheridan's place. It's about an hour away up the mountains to the east. Matt said we could come by early afternoon. Tehachapi was hosting several horse events that weekend so we went early and stopped by the TWEA Equine Challenge. It was a low-key event where people could ride an extreme course through the mountains. People were judged on time only and the organizers give all the money to charity. 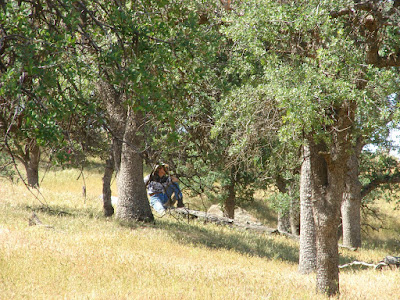 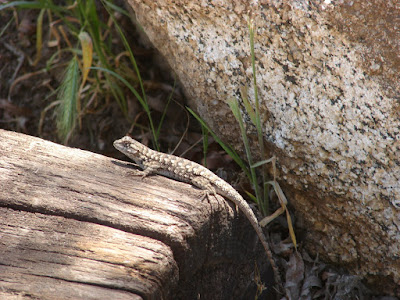 One of the riders 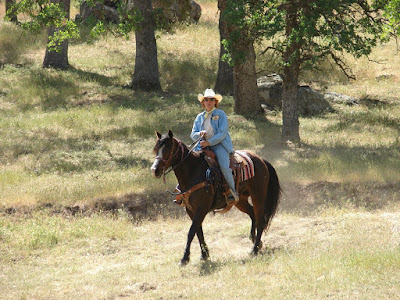 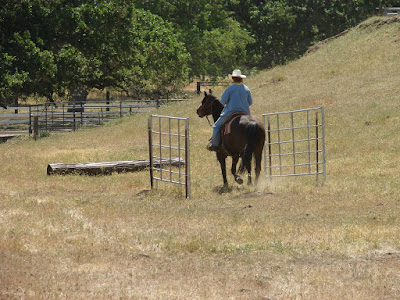 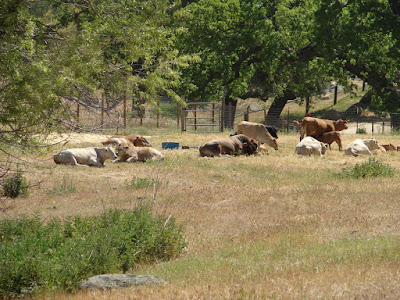 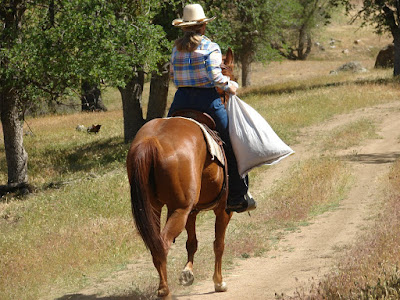 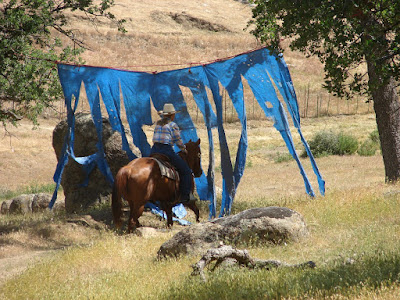 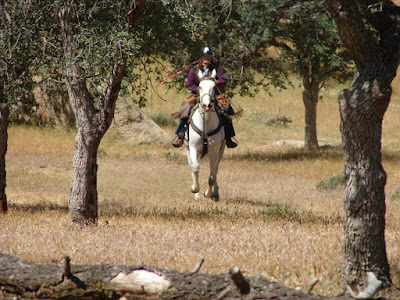 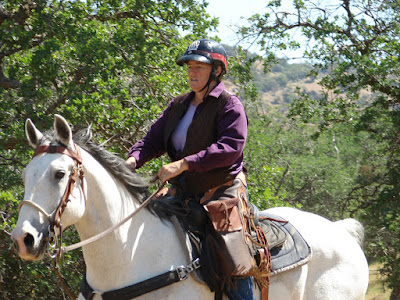 That's our valley way out there beyond the stop sign. It was a crappy air day. 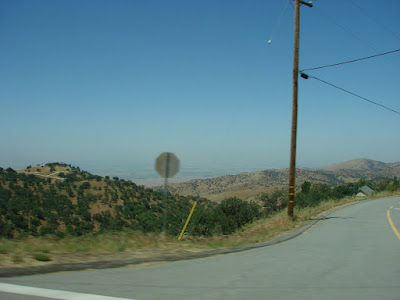 The windmills that generate electricity. There is a boatload of them. 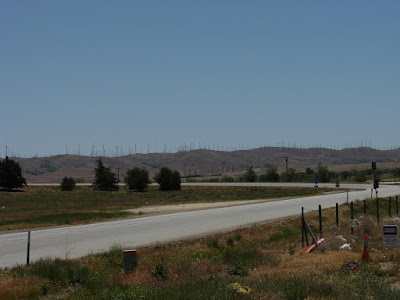 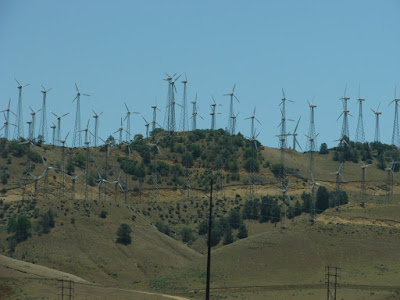 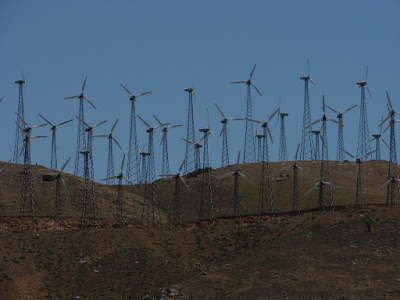 Matt could not have been nicer. He was clearing some weeds around his property but stopped to show us around. We discussed philosophy and he previewed some of the stuff we would be doing. It sounds like it will be a lot of one-on-one. Our class is pretty small by design. I think there are only five of us. My ability to ride is still in limbo and I offered to give my spot up. He was very cool, told me not to worry about it, and that we would have a lot of fun. He recommended a great local restaurant, we had lunch and headed back down to our 105 degree valley.
Posted by John Harrer at 5/20/2009 09:21:00 AM No comments: Links to this post

Well, we finally got part one completed. Just not enough hours in the day. Ranae was a champ for filling in for me. She had a lot to contend with: ME directing her for the camera, ME telling her what exercises to do and how I wanted them done, JESSIE who was just a little full of herself, and all of the kids, horses, wind, traffic that was going on that day.

Still unable to ride. Going to a specialist in Santa Barbara next week where I hope to get some answers.

So we wanted to work on the RWC Series I video. My personal goal is to video Jessie doing all the exercises in both ground series and riding series. Ranae was up to do some of the riding portions, so after a beauty treatment (Jessie's) and some groundwork, she put her saddle on Jessie and we went out back.

Now, I'm not making excuses for her (although I will take some liberties in coloring it towards my horse's favor), she hadn't been ridden for awhile and she had a different rider and saddle on her, which hasn't happened for an even longer time. So when I tell you she almost bucked Ranae off three times, it's not as bad as it sounds (really?!).

We were out back in our dirt pasture because I wanted to demonstrate how you don't need a fancy arena to train. During the "passenger-at-the-trot" exercise in the farthest corner, some kids behind Ranae made a loud crack and Jessie lunged forward and gave a little kick. But then she dropped her head and waited for another cue. Can't stop her from being scared, right? And she did what she was supposed to do.

Then a little later I suggested Ranae tap her on the butt with the mecates (She doesn't usually ride mecate reins), she tapped her like she would Dusty and Jessie took offense and again did this rocking chair motion and Ranae leaned forward to grab the one rein and Jessie tossed her over the saddle horn. Again, Jessie could have freaked out, but she just stood there as Ranae, hanging around her neck, gathered herself and slid off. The third time, Jessie was just getting pissy over having to work and gave a kick and Ranae lifted one rein and she stopped.

While challenging, it was fun to see how Jessie did with a different rider. Ranae gained some insight to some of the challenges I face riding Jessie. And, it gives me some new things to work on. Not sure how long it will take to edit the video. I'll get it up as soon as I can.
Posted by John Harrer at 5/12/2009 09:46:00 AM 2 comments: Links to this post

Email ThisBlogThis!Share to TwitterShare to FacebookShare to Pinterest
Labels: Part One, RWC Seies I

There is a park down by the river and next to it is a barn that has been repaired. It's called Horseman Park. My neighbor and I trailered our wives to to a trail about 8 or 9 miles away and we headed for the park with lunch stuff. We hung around (read, took pictures) the three hours it took for them to ride to us and made them lunch. Here are some pictures.