Saturday clouds rolled in but the temperature stayed warm and the humidity was oppressive. We played tennis in the morning and had a birthday party to go to in the afternoon and just couldn't squeeze in a ride. We did manage to give the horses a bath and get a week's worth of sweat and dirt off of them.

Sunday morning the clouds had cleared and it was drier. After a nice breakfast, we tacked up and grabbed some extra water and headed for the city farm. Our trip on this day was actually going to take us all the way through the city farm and out the other side. It was about 5 miles to a major road and a little store where we knew we could get a snack and some fluids (for us anyway.)

There is one big road to cross before we can get to the city farm property. It's busy on a Sunday morning. We had left around 9am and headed to a fallow alfalfa field to work on some circles and do a little loping. Both horses did pretty well with the warm up. 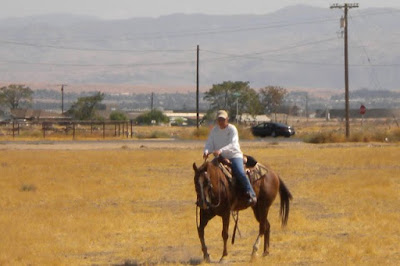 The roads in the city farm are pretty wide and it's a lot of fun to ride. We worked on some speed control and when Jessie got too fast we just did a circle and took off again. It seems like she can go on forever.

The developments in that direction had limited us to certain roads and at one point we had to walk along the shoulder of a busy street. They both stayed calm and collected and it was nice riding by the homes at a pace you could actually look at them. Many of these houses were built when there were nothing but fields out here, but as things change, this area was getting an influx of new homes. There is a new high school that was just built and they had a grassy area that was very inviting. Ranae rode on it first. The grass was established and the dirt underneath was firm. When she loped on it it didn't leave any marks, so I decided to give it a try. Boy, was that nice to lope on. The grass cushioned the footfalls and it was an extremely smooth ride. 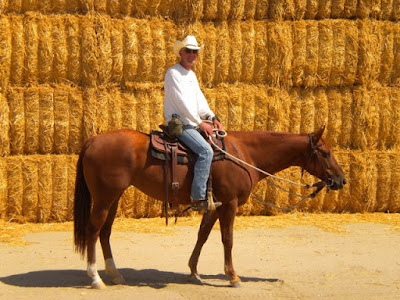 Some BIG Bales of Oats

We got to our little store and bought some snacks and drinks and found a shade tree to sit under for about 15 minutes. It was a nice little break. We had been riding for about 2 hours at this point. 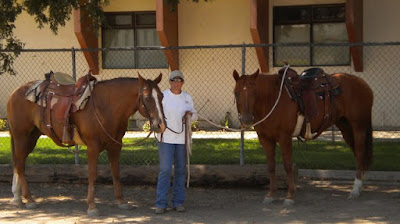 Relaxing Under the Tree

After the break we worked our way back. One of my goals was to lope Jessie for a mile. As we got back on city farm property we found a good long road (or so I thought) and took off. She broke down a couple of times as we crossed intersections and we kept going until we hit an edge of the farm that was a dead end so I turned her around and we road back to Ranae and Dusty. It actually was about a mile and a half and she still had some go in her as I was getting ready to stop.

Ranae took off for a lope and Jessie was pretty concerned about her buddy leaving. I tried to have a collected trot but she would have nothing of it. We had to do a bit of work and it turned out to be a much bigger ordeal then the long lope.

We did a little more trotting but, quite frankly, our butts were getting sore. We had been out for about four hours and still had another hour to go. Riding through the fields was peaceful and quiet. Some had been irrigated and when the breeze came up, it felt nice and cool. We just walked and enjoyed the time together.

We got home, gave the horses a well-deserved bath and a snack. We had some watermelon, then cleaned the saddles because it had been a dusty ride. I checked everyone over pretty good this morning and both Dusty and Jessie looked good. The distance meter on my GPS said we had gone almost 15 miles. 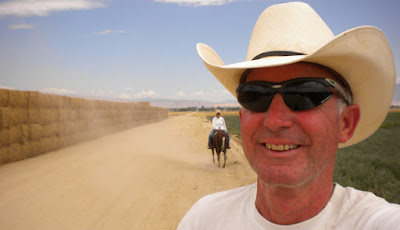 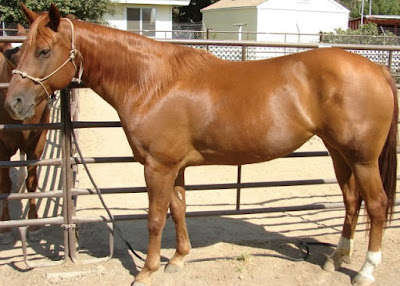 Is there a prettier looking horse?
I don't think so.

We spent our time on Saturday afternoon going over the last half of the exercises in RWC I. I'm hoping to video those soon. And, I hope she does them just as well as she did Saturday. We had not worked on them for quite some time and yet she did most of them very well. Smart and beautiful. I AM a lucky guy.

Sunday Ranae and I went for a 6 miler. It was hot and we went out to the city farm. I want to lope a mile straight. It sounds simple, but a mile is a long way on some of the trails we ride. I figure we'll work up to it. We were able to lope almost a half a mile before we ran into the bee hives that are stationed everywhere on the farm. She broke down once or twice but she's getting it. We'll go for the full mile on a long ride we are planning for this coming weekend.

Ranae had the day off today. She rode this morning and she is going to have both horses saddled and ready to go when I get home so we can go for a quick evening ride. Days are getting shorter and it will get increasingly difficult to find some workin' time.

My Gaining Respect on the Ground I video on Youtube reached 25,000 views and I now have over 80 subscribers. That's cool. I never thought there would be that many people interested.
Posted by John Harrer at 8/17/2009 04:59:00 PM 1 comment: Links to this post

After the Matt Sheridan Trail Workshop, Ranae and I decided to try a Trail Class. We found an Open Show that had a Novice class and entered. Our horses did pretty good and we came away with a first and a third place. More importantly our horses got us around the course. Here are our runs:

Some of the other classes looked interesting like Western Horsemanship. Not sure all the requirements, but maybe I can find out more about them.

Thursday we set up the trail course in our yard and worked on our exercises. Friday we took the horse out on a short ride. Saturday we took them on a six miler and got to work on a bunch of stuff. I was loping Jessie in a small circle. Sunday, before the show, we went on a quick one hour ride that included a lot of trotting. By the time Sunday evening rolled around everyone at our house looked pretty worn out.
Posted by John Harrer at 8/10/2009 03:33:00 PM 3 comments: Links to this post

We went back up to Sheridan Performance Horses for a lesson with Matt. I learned a lot. Jessie has been pulling me around and I need to work on getting her softer through the body. I took video and here's a little taste of Ranae and Matt working on circles and the beginning of a spin. We had two cameras. One was on a tripod and I held the other one. I thought it would come out better actually, making it more moving and energetic, but it was fun playing with my video editor. It's not too long.