Jessie has not been getting the work she needs while I've been off training Scratch (See Scratch's Blog).  Part of the reason I took on the Scratch project was to give Jessie a little break.  She has seemed a bit "off" since she stepped in a gopher hole a few years back.  It's not a consistent enough injury to get checked out.  Her limp seems to come and go sporadically.  The four months of the competition with Scratch would be a good hiatus for her...or so I thought. 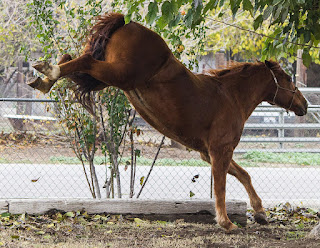 Back on August 28th Jessie had a bout of colic.  My usually healthy, easy keeper, went south.  We got her to the vet and he took care of her.  Thank goodness it wasn't too bad a case and she made a full recovery.  It was probably noticeable back then, but I was to busy with Scratch to see it.  She didn't whiny or act up when we left for training so I thought she was okay with it.  The lack of work took its toll on her.

Scratch's competition ended on October 11th and, while I'm still training him, I gave Scratch a week off to recover from the arduous prep work we had done in the weeks leading up to final days.  When I got on Jessie to ride she was lamer than ever.

Now normally I would take her to the vet.  What was stopping me was the way she acted at feeding time.  In the mornings I would walk by her pen to get to the hay stack.  She would bounce around like a bucking bronco.  No sign of limping here.  Her tantrums were big as she kicked her back feet high above the top rail of our 5 foot panels.

I started taking her on short easy rides.  We would trot a few steps, then walk - mostly walk.  As time went by the limp eased and rarely shows up (although it's only been about 8 weeks).  The girl just needs to work.  I thought giving her a rest would be a benefit - a little vacation.  She needs a job and to move.  We are working more regularly now and we'll keep after it.