This is Frosty.  I've been working Frosty through the Method in preparation for our visit to the Bar SZ Ranch with the Norcal Downunder Brumbies in May.  I'll be doing a presentation and I want to get my act together.  Working with one horse has its disadvantages.  Yes, you can become a little complacent.  Working Jessie doing the same exercises can get a little boring.  Not only for me but for for Jessie too.

We've had three sessions so far.  Frosty is a mare.  Sorry, don't know too much about her background - I should.  She is far more sensitive than Jessie.  We've been doing a lot more desensitizing.  She has some very quick moves and has dumped a few people over the years.  I'm quite interested to see how her training progresses compared to Jessie's training.  My goal is to see if I can get her as bombproof as Jessie.  I think this could be quite a challenge.  It will demonstrate to me the differences between horse personalities and training.  I'm excited by the thought of discover. 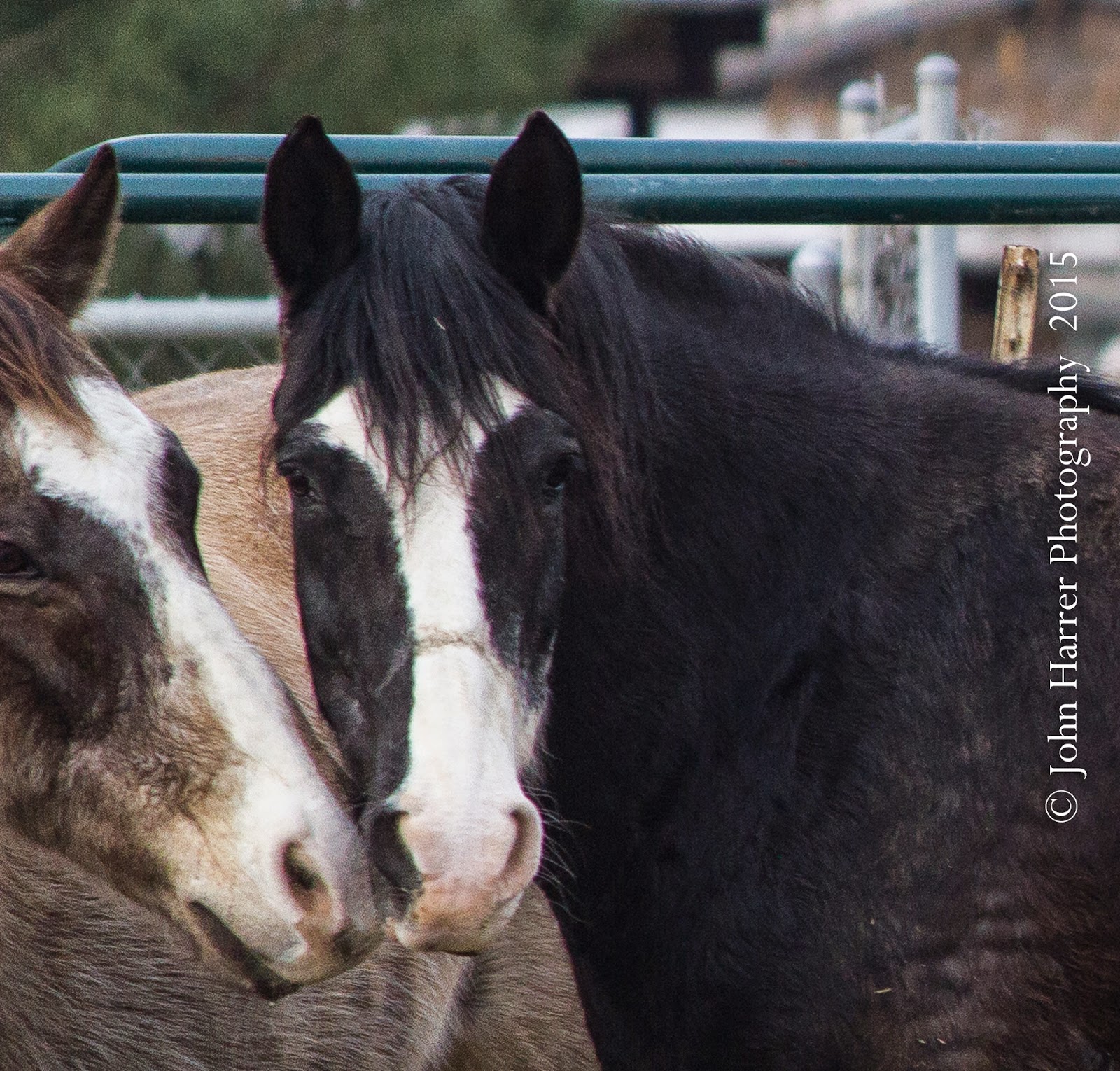 Frosty has had a good amount of training from some trainers in town.  The owner has taken her to a couple of clinics.  She doesn't get ridden very much and with any horse that can be a challenge.

Today we started with a little desensitizing, then went to lunging.  First, Stage One, then Stage Two.  She has a nice little roll back.  She is a smaller horse and I can see her quickness from the ground.

Last work out we tried the run-up-and-rub exercise, and while we were mildly successful, I went back to the head-shy exercise.  I must have worked on this as an exercise between impulsion exercises three times for a total of 30 minutes. By the end of the session, I think she was connecting with it.

I also liked the reaction I got to the throw-the-rope-to-a-stop exercise.  Frosty's back end would kick out and she would step her shoulders toward me.  That just gave us something to work on.  I was able to see improvement going to the left.  The right, not so much.

I'm hoping to work with her tomorrow and Sunday.  I have no thoughts of riding her for the future.  I am trying to keep the thought of "I'll know when to ride her, when I know she can be ridden safely."

Ranae are doing a Working Equitation schooling show in March.  We'll be reporting on it in an upcoming Whoa Podcast.  We worked on some of the dressage test out back today.  The instructions are fairly confusing.  We broke things down into small chunks so we could work on a few of the maneuvers we'll need.  One was trotting in a straight line from one spot to another. Then there were the 20 meter circles.  Oh yeah, those are going to be fun.  I had the curb bit in Jessie and it really brought out the shiny spots in her lack of training. 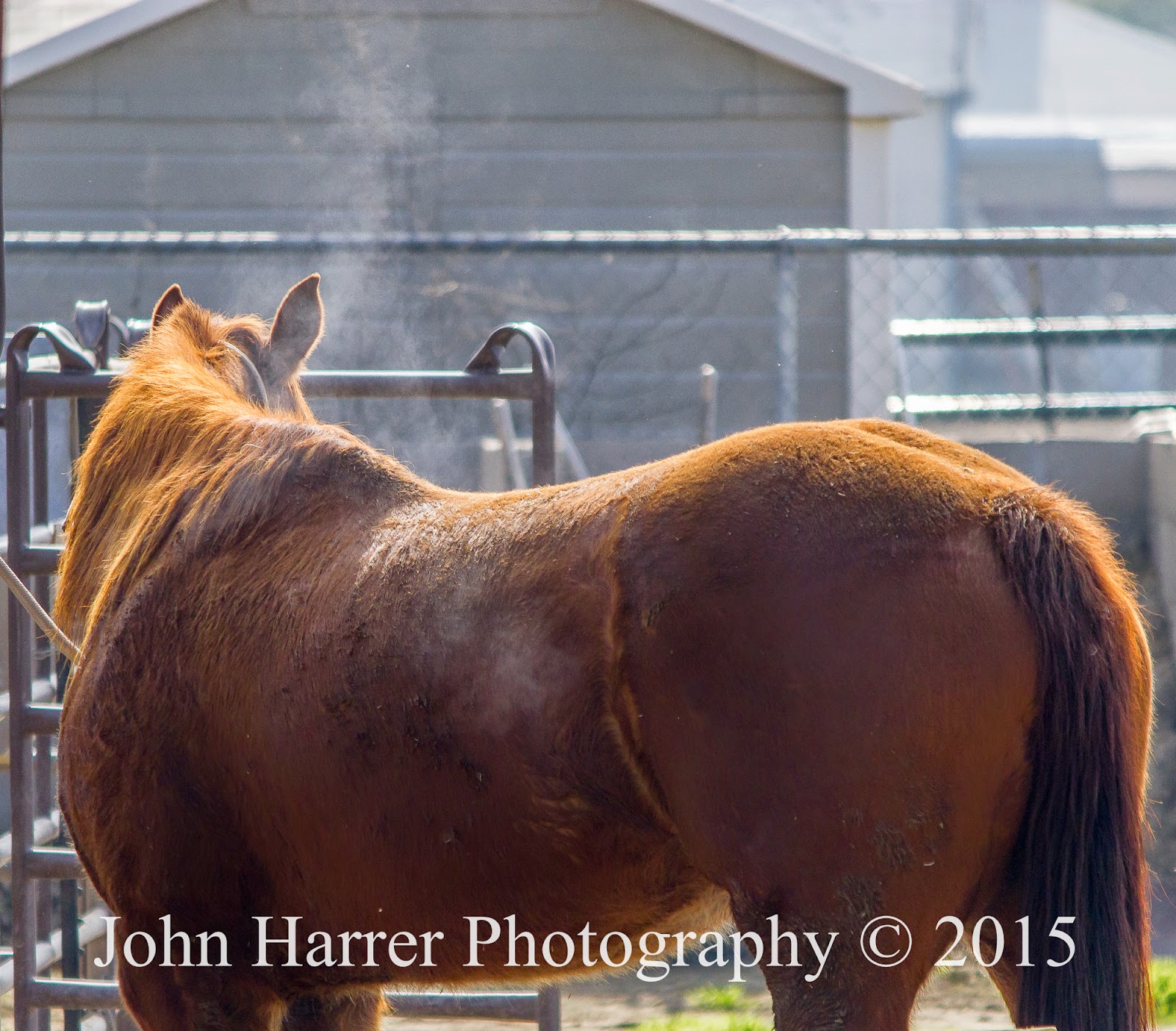 The other thing we worked on was taking off at a trot.  Not a few steps and a trot.  A trot.  Boy, just trying this stuff helps you realize how lackadaisical you can become.

It was a cool day.  The fog had hung in most of the morning and it really didn't look like we would be able to ride.  For a different Whoa Podcast, we are meeting up with the NorCal Downunder Brumbies, a Downunder Horsemanship group.  I'll be doing a demo on the mounting block exercise at the Bar SZ Ranch over Memorial Day Weekend.

I needed to brush up on some (make that all) of my skills.  Our neighbor keeps three horses back behind our property.  One is an older Arab, Gunner, one is her riding horse, Charlie, and the last one is a real sensitive mare she hardly rides named Frosty.  I asked her if I could work Frosty and she said it was okay.

We started at the beginning with desensitization, flexing, lunging, yielding, and the sending exercise.  It was quite fun being back out there again doing the basic exercises.  After working Frosty, Jessie and I ran through the same exercises.  It's really interesting to see how the two different horses handle everything.

First, we put the lead lines on Dusty and I sent him from the ground over the barrels.  Good job.  We went both directions.  I don't think we had had him jump anything in a year.  Then, with the lead still attached, Ranae got on and I directed Dusty to jump again.  A couple of times over and Ranae was in the comfort zone and we put on the bridle.  She and Dusty went over great.

Then we repeated the process with Jessie.  It was fun being able to jump the barrels having to only worry about hanging on.  Well, I did give her some leg to get her moving.  It gives you a lot of confidence before trying with the bridle in.  Now I think we will be able to go a fair job on most any jump.  We still have a lot of things to work on, but we have got a good start to the New Year!
Posted by John Harrer at 1/25/2015 05:07:00 PM 2 comments: Links to this post

Last week we went to the Ojai Valley Cowboy School to do a show for the Whoa Podcast about Horses and Horsemanship.  Jeff and his wife Jay O'Haco are very knowledgeable and really want to help their clients learn more about the cowboy way of life.  They offer a number of different "stations" on all aspects of living on the range.  We'll go into those things on an upcoming show if you want to listen, but today I wanted to tell you about something that just "clicked".

A few years ago Ranae and I took up ballroom dancing.  We are still rather shy about dancing in public, but we go to group classes most Tuesday nights.  We really like the Waltz and we are doing an Intermediate class right now.  Last night we were learning syncopated (thank you spell check) turns.  One outside turn, one inside turn, one outside turn - all in succession.  Ranae is turning not me.  I have to lead the darn thing.  Ranae turns one and a half times on the outside turns and two revolutions on the inside turn.  Not only do I have to lead, I have to help her with the turns.

Like horses, the first couple of times doing the maneuver I don't think we'll (me) will ever get it right.  Then, it looks promising.  There's a glimmer of light and that motivates us to carry on.  Of course, the next phase is totally screwed up, before we start to make progress again.  I've learned that this is the way it is and know we just have to plod our way through the different stages.

The instructor came over as we were having problems on the turns.  We were close to nailing this move, but something just wasn't right.  He told me I was leading the turns a step to early.  If Ranae was on the wrong foot when I tried to turn her, there was no way she would be able to make the correct number of revolutions.

It dawned on me that this is exactly what Jeff O'Haco had told be at the cowboy school a few days earlier while I was riding their schooling horse Luna.  If I tried to get Luna to turn while her front foot was planted in the ground it would throw her off balance.  But, if I signaled her to turn while that foot was in the air I would really be helping her out.

Now both my horsemanship and my dancing ability hinge on my awareness of my partners' feet.  I've got a long way to go.  I'm not quite sure how to get good at this yet, but I'll learn the dance.
Posted by John Harrer at 1/21/2015 06:47:00 PM 1 comment: Links to this post