This is why I love California

We may not have an arena, but the week before Christmas it's warm enough to sneak out out on a Sunday morning for a ride.  The roads were quite and we headed out to the alfalfa field to warm up, over to the airpark field for some loping, then along the canal and back home.  The temps were in the low 60's and, while I had gloves, it was too warm for them.  The horses did well as we put them through a series of exercises.  Heck, it was even warm enough to give them a bath when we got home.

We had watched the Downunder Horsemanship with Tricky, the off-the-track thoroughbreed.  It was the episode where Clinton uses the trees to circle around.  The next day we were riding across from a farm and there was some plowing or harrowing going on.  The tractor had some big piece of equipment it was dragging behind it.  The horses weren't frightened, but they weren't paying attention to us either.  There are quite a few tumbleweeds in the field we were riding in, so we stated circling the horses around them like we had seen in the show.  It was sloppy at first, but it got better.  It was a nice day and we had all afternoon and we worked on it for about 15 minutes..

The horses finally got it and we went off and worked on our backups.  Also in that show, we had seen Clinton backup Tricky and the steps were light and quick.  Jessie will back up quickly, but not lightly.  Dusty is just the opposite.  We worked on that for about 10 minutes in one area, did some riding around, and then practiced it again in another area.  I think there was a little improvement in both horses. 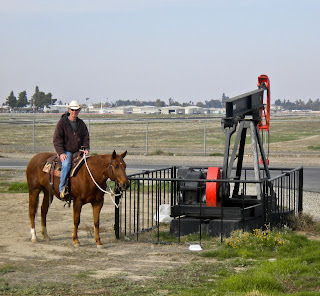 Ranae went riding with her friend on Saturday because I had the final in my photojournalism class.  I got home around two and was on Jess a little before three.  It was cool, but clear as we headed out.  As soon as we hit the canal we started to trot.  She was a little distracted, but she gave me no problems.  We had none of the struggles we had when we first started going out alone.

I was listening to my ipod most of the way.  It's not the safest thing to do because it makes it harder to hear what's going on around us, but Jessie usually lets me know if something is up.  Well, about 1/2 mile down the canal we start loping.  She's at a comfortable pace and so I ask for a little collection.  My head is down because I'm looking for the give.  Then I move her left two-track stlye, and then right and again my head is still down.  She pops her head up and I can tell she is speeding up so I look up and there across the canal is a pit bull.  He leaves us alone, but it was a bit of a sight.  I turned the ipod back up as soon as we were a safe distance.

We walk and trot a bit farther.  I stop to pick up some stones because I know there are some other dogs up ahead.  Then, we start loping again.  I'm trying to change her speed with my seat and I guess I realxed a bit too much because she hit the brakes and it threw me to the front of the saddle.  We practiced this for awhile and then I looked down and noticed my pepper spray had come off the saddle.  We loped back around to where I thought it had come off and when we didn't find it, we loped back to where we were in our ride.

We loped and trotted through the fields working on different things and then headed back.  We found the pepper spray a little farther away then I had initially thought.  When I stopped to pick it up I noticed how sweaty Jessie had gotten.  I guess we had done more loping than I thought.  I walked her most of the rest of the way home which was about a mile.

On Sunday Ranae and I rode in the other way and did some "drill team" circles in one of the fields.  It's a good exercise because Jessie wants to go faster than Dusty.  We took turns on the inside of the cricle and both horses did a fine job.  We had the camera and I took a little video of a plastic bag on the fence that we used to practice desensitizing .

Then we rode past the Mexican's stable and there was a man lungeing his stallion.  It was a nice looking horse.

Ranae's always telling me how Dusty jumps tumbleweeds when she's loping, so I got her to try and do it in a nice little soft patch.  Dusty knew the camera was on and refused to fully cooperate. 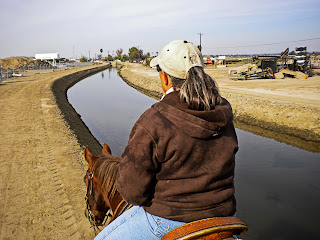 Headed down the canal. 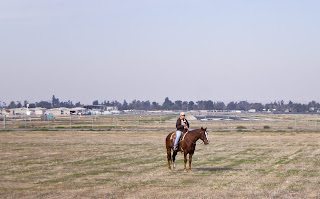 The field next to the Airpark.

Not the best video quality.