The girls went up the hill to ride with some of their girlfriends and I was left home alone. I cleaned up my girl and set up the tripod to see if I could take some pictures.

I had to ground tie her while I walked over and set the camera. It only has a 10 second delay, so I was hustling pretty good. 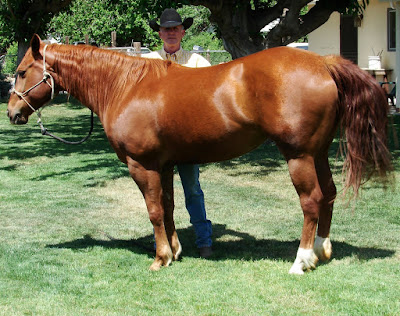 And then she found out she could grab some grass in between takes...typical starlet! 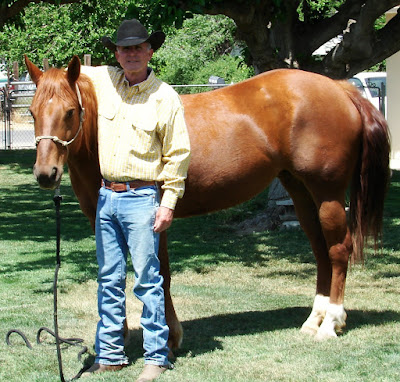 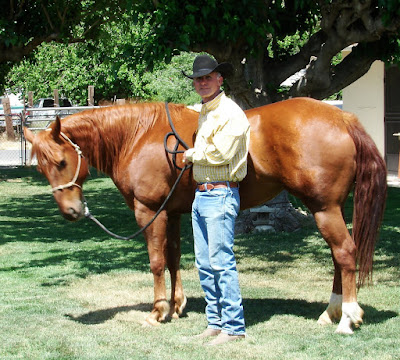 Then we tried it under saddle. I'd side-pass to the tripod, click the delay then move out in front of the camera. She did pretty good. I kept forgetting to smile. 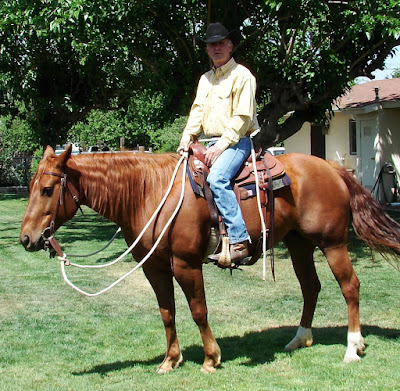 I had found a set of 6 mini cones at Sports Authority for nine bucks so I set them up 21 feet apart and we rode a pole bending pattern as I tested my ability to ride. She was a little stiff at first, but I think she was getting into it. I then set the cones up in a circle and we did some loping. Again, the steering was a little stiff at first and then she loosened up. We did 8 or 10 circles in each direction and then did a few other little exercises. It was a fun ride.
Posted by John Harrer at 4/27/2009 02:27:00 PM 4 comments: Links to this post

My Dad is still pretty active for 85. He takes a line dancing class on Tuesdays that we've been going to as well. Back in March he talked us into taking a ballroom dance class. Our family doesn't have natural dancing ability and personally, I'm rhythmically challenged. The dance instructor was teaching two dances, the waltz and foxtrot. We learned the basic moves over four classes. It's been about a month since we took the class. We've practiced a couple of times, but it is amazing how fast one forgets the steps and variations.

Yesterday we were working out back and I was helping Ranae work on the bend to a stop exercise. At any gait you sit, flex, put a heel in position 3, wait for Dusty to soften and yield his hindquarters, then take the leg off and wait for the flex. She was having a problem remembering all the parts and handling her reins (she needed to smack him on the butt to quicken the yielding) and that's when I realized how much this was like dancing.

During the dance class the instructor was very firm about how we kept our "frame" because as men, we were leading and the "frame" helped us signal our intentions to change direction or do a variation. The other thing we had to work on was "leading". She constantly reminded us we had to lead and she had to also constantly remind the women to "not lead". It seems that if the men didn't show definitive leadership it was common for the women to try and lead. Sound familiar?

Email ThisBlogThis!Share to TwitterShare to FacebookShare to Pinterest
Labels: book

Saturday was vet day. I had given the annual vaccinations a couple of weeks ago. I have Jessie on an every other year dental program. It seems to be working okay. She had some sharp points, but nothing too bad. The vet said she was looking pretty good and that I should not allow her to "gain any weight". He said you could feel still feel her ribs...barely ;>)

Dusty got his dental, sheath cleaned, flu shot (Jessie has a bad reaction to flu shots), and Ranae got an opinion on his arthritis. We bought some Cosequin ASU to try.

Saturday they were both still down from the morning sedative and it was a good time to catch up on some yard work. Sunday was hot. 95 degrees hot. Jessie and I went out on the canal. she moved pretty nicely. I sent up up and down some burms and she got tired of that fast. We found an irrigation ditch to cross over a couple of times and then another one to jump. She needs more of this to help her learn where her feet are.

We walked out about two miles. We found a spot to do some LFR II at the lope. She kicked up a bit in protest and then complied. I did some desensitizing and then we walked a bit farther. The wind was blowing a big plastic bag on a barbed wire fence. I went over there to see if we had a training opportunity. She could not have cared less (good) so we went on and found another place to do some loping. This time there was no protest. Somebody came by and wanted to chat so while we talked I did some flexing, yielding fore and hind quarters with the touch and rub exercise.

On the way back we did the line driving exercise with my arm taking the place of the stick. I worked on some speed control as we walked pretty fast, then trotted and then went back to a walk. I even got her to lope beside me for a few strides before she blew past and we had to start over again. All in all we were out for about two hours and she welcomed the cool bath when we got home. I tossed her some hay, cleaned their pens and headed for the garden with my cocktail.
Posted by John Harrer at 4/20/2009 10:43:00 AM 1 comment: Links to this post

The weather here has been windy and cool the last 10 days or so. There hasn't been much to do except some grooming and close quarters groundwork.

Monday afternoon was nice and I was home with a little daylight to spare, so I took Jessie back out to the canal. Yes, we went by the stud who was just as rambunctious as ever. This time I kept my head down and kept walking and Jessie did a much better job of following me.

There was a theory I wanted to test: "The farther away from home, the less she pays attention to me". When I go into Jessie's pen I walk to the center and wait for her to come up to me. She is very good at this and I start on the off side and rub her as I walk around to the on side to put on the halter. Then I flex her on one side, yield her forequarters, and flex the other side. These flexes are quick and responsive. We walked out the front gate and I flexed her again. These were a little less quick and not quite as far as the ones in her pen.

After we were passed the stud, I asked her to flex. Out here she was slow to give. The flex was shallow, a hasty touch to her shoulder and a whip of her head back. We spent a few minutes doing the flex with the bump, bump, bump exercise and she was once again paying attention to me.

We did some side-passing and yielding hindquarter before heading back. The wind blew most of Tuesday and Wednesday and the temps cooled. It's supposed to warm up for the weekend. We take them to the vet on Saturday morning for routine dental work and I think the girls were talking about a ranch penning something-or-other on Sunday.
Posted by John Harrer at 4/16/2009 10:50:00 AM 3 comments: Links to this post

We went out Monday evening on an "on lead" walk. Our plans were to walk down the canal bank and work on some obstacles and gw exercises away from our usual training area. I didn't know that the neighbors down the street were keeping a new stallion.

As we headed in that direction Ranae was in front of us leading Dusty. Jessie, though not show any outwards signs of being in season, was very interested in the stallion. As we walked past their pasture the stallion started running all over the place and blowing and snorting. Jessie's tail was up and swishing and she was snorting too. I tried yielding her hindquarters and some c-pattern exercises, She wasn't paying attention at all and got whacked pretty good a couple of times, but still showed little interest in my "leadership". It didn't seem like a good idea to keep working her right there with the stallion running about like a banshee. We were still on the asphalt.

I kept her moving and once we were about 50 yards down the canal bank she started calm down. We then did some leading beside and side-passing along the fence. We also did a little jogging. We got to our obstacles and did some sending around them which necessitated her going down the canal bank almost to the water. She did all of these exercises very well.

On the way back I chose to take a different route that avoided the stallion. Guess I lost confidence in my leadership skills too.
Posted by John Harrer at 4/01/2009 04:18:00 PM 3 comments: Links to this post