We got to go to Las Vegas for the weekend. It was weird being there so soon. I hadn't been there for ten years before seeing Clinton Anderson earlier in June. We went to relax and see the Cirque De Solei show Zumanity. The trip seemed a bit rushed and in doing the math we were only there for 43 hours. After you factor out the sleep, shower, eat, show, driving and walking around there wasn't much time to actually relax. It was fun, though and good to get away.

We stopped at the Southpoint on the way out of town and I got to show Ranae the arena and the horse facilities which were open oddly enough. As for our gaming adventures, let's just say the lights are still on in Vegas ;>)

How long do we lope before it gets slower?

Saturday afternoon we went out for a ride to the usual haunts. It was still fairly warm...in the nineties I would guess. We did some warm up trotting and loping in the big alfalfa field. Jessie was a bit hard to steer (as most always) and we got through the warm up and trotted down the canal for about a mile. When we got out to the development we saw this little gem that had been dumped. She was cuddled next to the carcass of a cat (I thought it was a stuffed animal) who I assumed would be her food supply for a day or two. 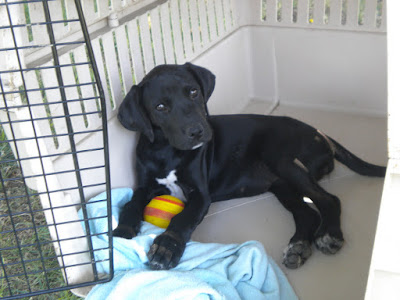 We rode for about two hours and then went back to pick up the pup who assured me she was okay and that once her owners realized she had "accidentally" fell out of their vehicle they would be coming back for her.

I don't know why, if it's the heat, or the extra trotting and posting, or if it's because I'm trying to sit more balanced in the center of the saddle with my feet under my hips, but I've been getting some saddle sores the last month or so. Sunday, I wanted to do a lot of loping to see if I could get Jessie to go slower. She has slowed down from the 16-18 mph she had when we started, but she is still too fast most times. We started our loping about a mile ahead of Ranae and then doing some circles and figure eights until Ranae trotted up to us. We walked about another mile where we found a lot that was about the size of a football field, maybe 100 yards by 60 yards. The track around it was smooth dirt so we started off in our loop. We probably went around that thing six times and she was huffing and puffing but she never showed a sign of "wanting" to slow down. On the way home we talked about ways to improve the exercise like going around a couple of times in one direction, then circling and go the other direction. That fast lope isn't the easiest to sit however, I'll have to toughen my butt up for the next session.

Even though I haven't been posting with my usual regularity, we have been working. Jessie and I have been doing more groundwork and working at liberty. The initial reason for moving to groundwork was essentially a time factor. The days are getting shorter and it was a way to get our work in "quicker", if you will. The surprise is, that even though we do many of the same exercises, I think this has improved my timing and feel. Because I'm working on refinement instead of the basic concept, groundwork offers me more time to think about what I''m asking for, giving the consistent cue, and sharpening my release time. Just spending time with Jessie is helping me to learn better horsemanship...imagine that!

We did get to ride on Sunday. We rode out to the City Farm with it's big wide roads in between alfalfa crops. We did a lot of trotting (with posting to stay in shape). On the way home we found a place to work on our "whoa". Jessie stops in one direction just great. The other direction, if you watched the horse h-o-r-s-e game video, not so much. We had to work on it for about 15 minutes before I got two consistent stops in the bad direction.

Ranae rode without her spurs and she got to work with Dusty on trying to work off leg pressure with the 10 thorn berry-bush as backup. At first Dusty noticed the lack of reinforcement, but by the end of the ride he had improved.
Posted by John Harrer at 9/13/2010 11:35:00 AM No comments: Links to this post

We've been staying busy at work. I've also have a couple of other projects going on that keep me from my weekly blogging. We continue our riding three times a week. We recently had some fun playing an old fashioned game of h-o-r-s-e. You know, the backyard basketball game where you call your shot. Here's our latest video: