A Tribute to Smokey

The very first dog I trained was named Smokey, an Aussie Queensland Heeler cross. He learned obedience and we had fun with the Frisbee. Frisbee dogs enjoyed a brief surge in popularity in the mid-80's. We gave demonstrations at college football halftimes, churches, and schools. It was a bunch of fun.

You can see what I looked like 25 years ago, but more importantly see how good my best friend really was. Enjoy!

Our local ETI club had scheduled a ride for Saturday up in Woody, a nearby community. The weather forecast called for rain on Saturday. I am almost required to go to our Natural Food Convention in Anaheim and planned to go down early on Saturday. As it turned out, ETI moved their ride to Sunday and even though I spent all day Saturday at classes and walking the convention floor, we decided to try and make this ride. I'm glad we did.

The time change was tough as we had to get up an hour earlier. We hooked up the trailer. The horses loaded quickly and we were off. Woody is about 70-90 minutes north of town in the foothills. Only the last 12 miles or so are on a windy road. We got there just in time to join the other eight riders. 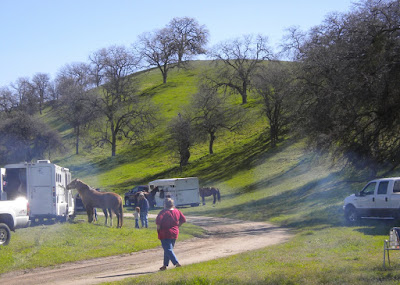 Jessie still has some issues riding in the trailer. She was sweaty when she walked off the trailer. 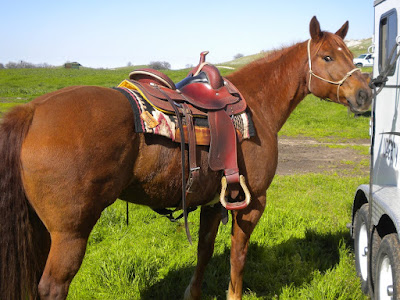 We headed off along the rolling hills of green grass and wildflowers. It was in the high 60's or low 70's and clear blue skies. 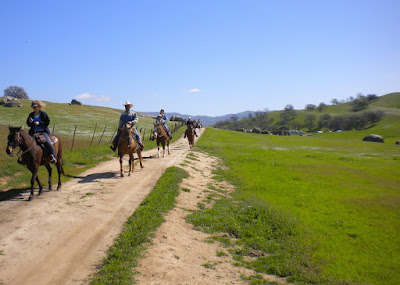 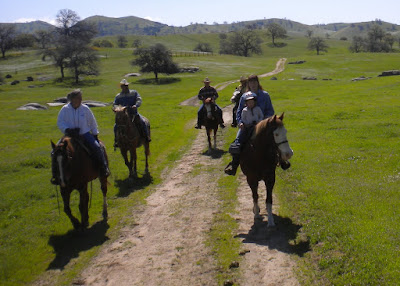 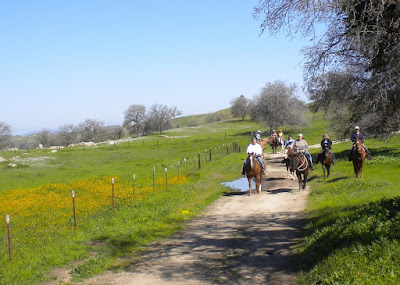 There were cows grazing on the property and occasionally we had to wait for them to move out. For the most part the horses behaved themselves. Grass nibbling was a problem. The lush green grass was up above their knees in some places and the temptation was just too great at times. There were these little flying bugs in some of the boggy areas and Jessie to great exception to them. She shook her head and swished her tail. They seem to bother her more than the other horses. 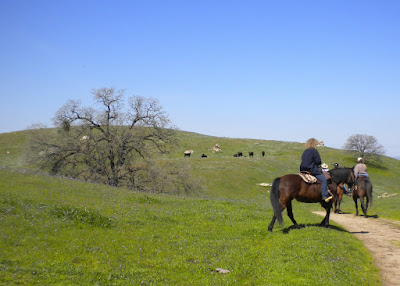 Cows laying around in the upper part of this picture. 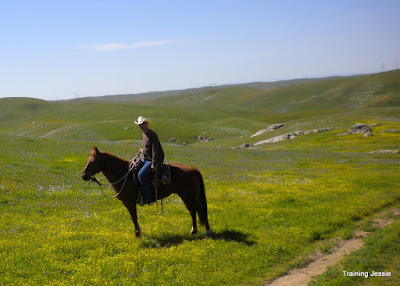 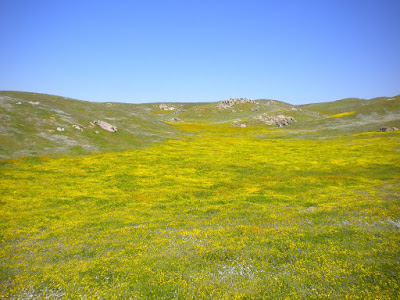 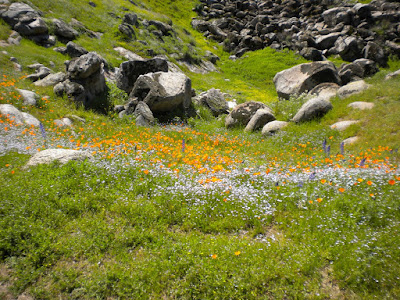 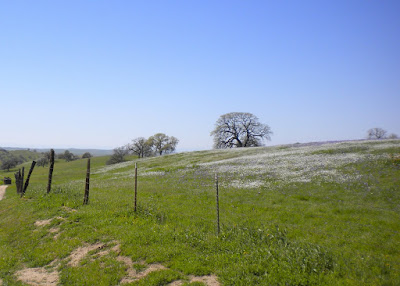 We rode for about two hours and then sat around and socialized for about an hour. The club had brought food and drink. We got to meet some new riding friends and spend the day in the sunshine. It doesn't get much better than this.
Posted by John Harrer at 3/16/2010 11:51:00 AM 1 comment: Links to this post

I listen to a lot of podcasts. One of my favorites is The Moth. It is stories told live in front of an audience without notes. This story by Sam Shepard was great and it involved his horse Roanie. I thought I would share:

A Little Groundwork - A Little Ride

I spent most of Saturday removing our old checkout counter at work. The twelve foot coffin refrigerator had to go out in one piece. We finally go it out. There was about four buck in change underneath it. It was like digging through someone's sofa. After the refir was out I called the cabinet guy who brought the new custom-made counter. We put the top from the old counter, which has been our counter for probably fifty years, on to the new counter. 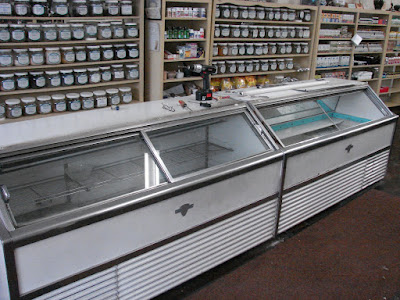 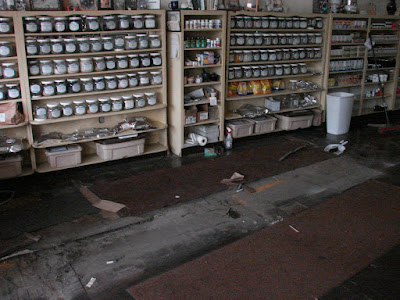 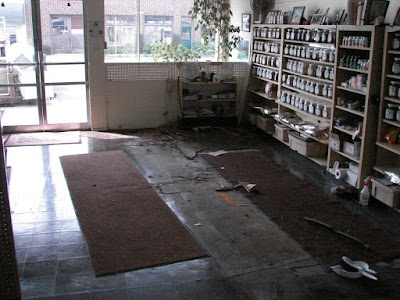 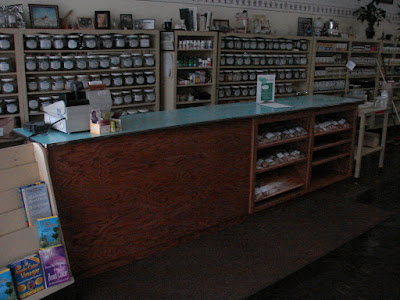 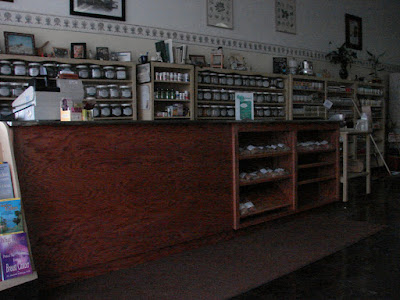 I got home late in the afternoon on Saturday. I moved the horses around so Jessie and I could do groundwork in the small area. We did a bit of LFR I & II some yielding and back-up along with some de-sensitizing. I took off her lead rope to see if she would let me do some of the exercises at liberty and to my surprise she did. As a matter of fact, she didn't leave me once.

Sunday we went for a ride out to the development and did the usual stuff. She didn't act up at all. Her loping is better, but steering her while loping is still a chore. We rode for about two hours and then had to get home and do some gardening. All the rain is making the weeds grow...

It rained a little more than half an inch on Saturday. For an area that barely gets 6 inches a year, that's a lot of water in one day. Sunday cleared enough to ride out. (We had hoped to head to the river, but the weather was still unsettled.)

There were plenty of puddles on our trail and we got to work on our water crossings. I gave Jess a little groundwork warm up and I do think it helped as we headed down the canal bank. They all tended to be concerned with every new blade of grass or piece of trash that wasn't there a month ago.

About a mile out we came upon a pretty big puddle. It was about 20 feet across by 15 feet wide. Since Jessie goes (or went) through water the easiest in the past the other horses lined up nose to tail as we were getting ready to cross. Jessie balked a bit and we had to work for about 5 minutes before she finally crossed. We then went around and tried to help the others. We played in the water for about 20 - 30 minutes until we thought everyone was comfortable with it and then continued our ride.

Like a little kid with new shoes Jessie and I went through every little mud puddle we came across. We worked our way out to a cinder block fence in a construction zone and did our bending into the fence exercise. She was much better as was the fence to work with.

Next stop was the big square. It was necessary to do a bit of cross country and there was, of course, water to cross. We came to a three foot, 6 inch deep rut only this time there was grass at the edge. I had been letting her drop her head to check out the water water, but now when she put her head down it was to sneak a bit of grass. When I encouraged her to "go", she replied, "Let me check this out again". After the third try (and the third bite of grass) I squeezed and said "Let's go!" She jumped the water, bounded up a little berm on the other side, and the gave a little buck just to let me know how disappointed she was to not have gotten to eat. We went back and crossed it again, then we loped a few circles. I think she lost a pound...
Posted by John Harrer at 3/01/2010 04:47:00 PM 2 comments: Links to this post