We went out to the river for a ride and to shot video for our H-O-R-S-E, Part Deux competition and we ran into a friend of a friend. There is a stable there. We talked for a bit. She had a new horse. We knew she was Parelli. I told her we were Clinton. She said we had to come see her tack room door. "Huh?" What could possibly be special about a tack room door?

Well, as it turns out, she had just moved into this space which was left vacant by a Clinton fan. The previous occupant was such a big fan she painted the inside of her door. So on one door were all the current occupant's Parelli stuff and on the other door was this: 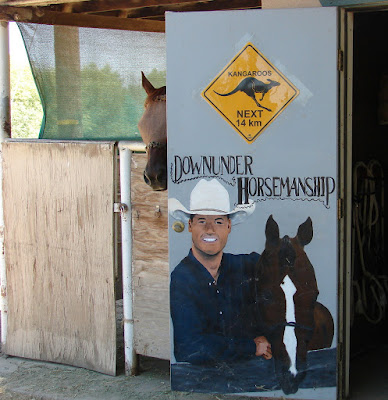 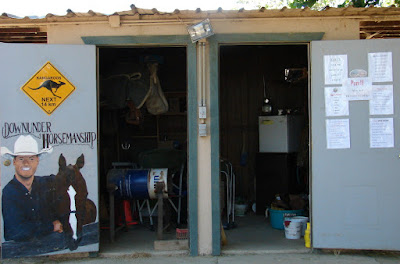 It's been a busy week...of riding

Yeah, we've been working it. Last Thursday we had one of the best full moon night rides. We got home, fed the horses, had a little dinner ourselves and left around 7 pm. I think the moon rose around 8-ish and we were out working on a few different things at our usuual riding area. As the sun set we headed for home and the moon was high enough to illuminate a very comfortable ride home. Temperatures were in the low 80's with a little breeze.

We got to bathe the horses in the moonlight and we were in the house by 9:30 sipping a glass of wine. A great way to end the day.

Ranae had Friday off and headed for the saddle shop to talk about her saddle. She came home and rode Dusty in my saddle.

Saturday she used my saddle again and I used hers. We took the advice of Rodney, the saddle shop owner, on where to position the saddle. Neither horses had any problems and we rode for about two hours.

Sunday we used our own saddles and rode for another two hours. We are getting efficient at working our exercises into the ride. Ranae will go off and work on something while I'll head in the other direction. I try to spend a good portion of the time on my riding, seat position, and balance. My hand movement/position has improved and my upper body is much quieter. Then I'll try to incorporate that into cueing Jessie to two-track, change leads, or serpentine. Then we get back together and just walk down the trail until something comes along we can play with, jump, or circle.

Monday evening I headed out alone and thankfully my little vaquero friend was no where to be found. We had a little dog problem and had to work our way through that. Jessie was very good out on the trail by herself.

Last night was the 5th ride in 8 days. As we headed out our gate and were standing in the street, a kid come up on his bike with his pit bull running along side. We know the guy by sight and he has a good handle on the dog. I think he sees us waiting for him and he stands up in the pedals to speed up and get past us. Jessie misinterpeted this as an attack and spun (great spin BTW) and turned to leave. I couldn't get a full one-rein on her becasue the asphalt was slippery and she felt really out of balance. The direction she was headed wasn't an escape, so I just held on and said "whoa". She realised there was no place to go and stopped. The guy rode past and we chased him for a bit before heading out for our ride. We were able to ride over an hour before it got dark and we got hungry.

We've been shopping for a new car. We finally decided on a Honda Accord, worked out a details with a local dealer and brought it home on Saturday. It's a sharp ride but by the end of the weekend we had put more miles on the horses than we did on the car. 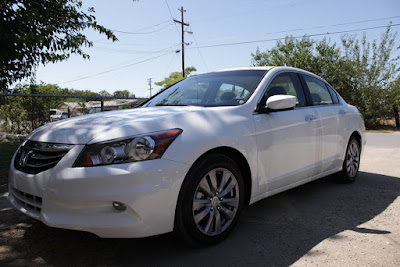 We don't live in a very fancy house, but it has a great view out the back door - especially in the morning. 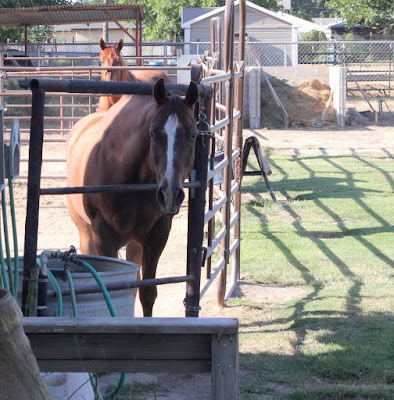 Unwanted Company - But a Learning Experience

I was able to sneak in an evening ride last night. Ranae plays tennis so it was going to be just Jessie and me. There are a lot of Mexicans in our neighborhood. I like Mexicans. I speak a little Spanish. They have improved our neighborhood in some ways.

As I'm riding out, off in the distance I see a guy and a horse about 1/4 mile behind us. I'm working on transitions of canter and trot, he's walking, I figure I'll stay ahead of him. 10 minutes later, I look back and see him galloping down the canal bank. His horse is on the muscle. Jessie is listening to me, but also checking back to see if this horse is coming.

At a little crossroads, I decide to stop and see which way it goes. Of course, he sees me stopped and thinks I'm waiting for him. Great! His horse is in a bosal and for the next 35 minutes I never see slack in the reins. Jessie stays relatively calm. I knew I wasn't going to get to do what we wanted so I headed for home. He followed.

He thought his english was pretty good. It WAS better than my Spanish, but every time he said something I had to say,"What?" We walked the 3/4 mi. back to my street. I got to hear all about his job and I think a bunch of other stuff. The guy could talk.

He would occasionally spin his horse around. I'm not sure if that was for control or to show off. I worked on moving Jessie back and forth across the road two-tracking style. And, as luck would have it, his horse was walking so fast, we got to do walk-trot transitions.

It was a good experience for us to meet up and ride with a strange horse like that. I wasn't quite sure how Jessie would handle it. She was calm, but alert. Once we got back to our house we did work on bending and side-passing, so we were able to get a little work done.

The searing heat arrived about the same time as our three-day weekend. Saturday's ride was right after breakfast around 9:30. We did a nice little loop about 2 hours long. We loped some and worked on sidepassing and backing up in between just trail riding and talking about our week. The horses were both well-behaved and we had a very nice ride.

Sunday was hotter. We got up an hour earlier and were on the trail by 8:15. We did a backwards loop through the canal when we discovered an unlocked gate. We found a couple of cool(er) fields to lope between as we made our way around and back home. We didn't do a whole lot of training, but we did try getting collection and worked on two-tracking back and forth along one particularly wide road.

I'm looking for a place to work on rollbacks. We don't have access to a practice arena anymore and it's been hard to find a fence with good footing around it. Jessie tends to quit on me when I do a straight stop - back up - rollback - and go. She'll do the first one good and the second one she just won't stop because she anticipates the back up and rollback. It's on our bucket list.

Sunday afternoon we took the dogs up to Mt. Pinos, elevation 8,000 feet, and did a two mile hike to the summit. It's a casual hike and I got to take some pictures: 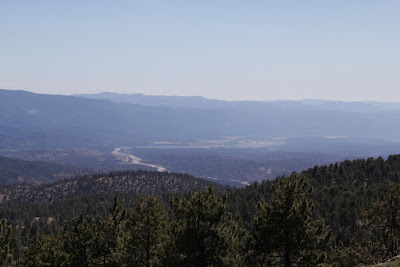 View from the summit. They say you can occasionally see a condor up here. 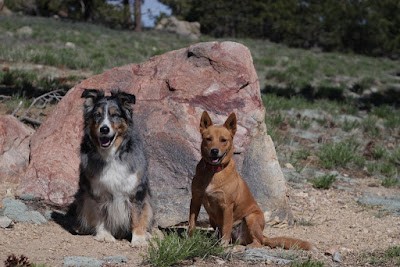 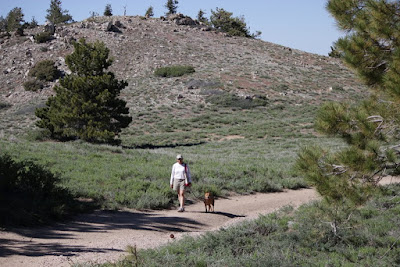 It was an easy trail, but the air was thin.

Sunday night was hot and noisy with all the fireworks going off in the neighborhood (and, yes, Sunday night was just the third of July). We tried getting up early, it just didn't work out. We started our ride around 9:30 once again, only it was hot. Really hot. Ugly hot. We rode a simple loop. I didn't ask too much in the way of loping. Jessie was working up a sweat at a trot. We kept it simple and just did some transitions and collections then headed for home. The horses enjoyed their bath and slept the rest of the day.