A Tribute To "Baby" 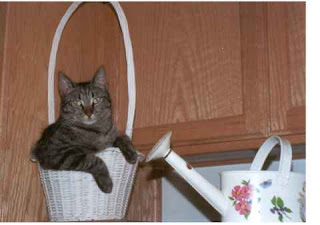 Ours is a tough neighborhood for cats. We live in one of those areas where people think, for whatever reason, it's okay to let you dogs out at night, where neutering any animal is just an added expense and probably takes away their personality. It makes for a terrible mix of too many cats being stalked by too many testosterone saturated dogs. We think Baby may have fallen victim.

Our neighborhood has improved. Ten years ago there were gangs and skinheads and lots of drugs. The house across the street and one house down was a drug house. One guy lived there and many visited. He had a son we would occasionally see on weekends. Somewhere around this time a small female cat started hanging around. I wouldn't see her that often, but when I did I would try and entice her over to me. We soon struck up a friendship and she would quite often come over and help when I was working in the garden.

Still only seeing her occasionally, one cool evening I invited her in for dinner. She enjoyed the evening and the other animals didn't seem to mind her presence. She was so small and petite I just called her "Baby". About a month later while working in the flowerbeds with Baby nearby I was confronted by the seven or eight year old boy from across the street, "What are you doing with my cat?"

"Good," I said, "She's just getting in the way over here." Then I handed him Angel Baby and he tucked her under his arm and carried her back home. 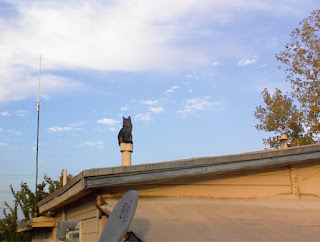 Over the next several months we surmised that Baby was hanging out in probably three different houses besides our own. Every once and awhile she would stop by for breakfast or dinner. We showed her the cat door so she knew she could always leave when she wanted. On cool mornings I'd catch a glimpse of her sitting on the water heater vent of our neighbor's house to stay warm.

As with most druggie situations the circumstances deteriorated across the street and Baby started hanging out with us more and more. Eventually, he went to jail and the little kid stayed with his mom (whom I sure was a lovely woman). Since we would feed her on occasion, we took her to the vet and had her spayed (It's our "You feed 'em, you fix 'em" policy). We kept her confined for a few days while she recovered and that help build a bond.

Baby had some real street sense. She was a good hunter helping me catch the gophers that plague our property. She loved to chase birds, too, as you can see her way up on this cottonwood tree. Another favorite pastime was sitting on the fence just out of reach of our neighbor's dogs. Their frustrated barking must have been music to her ears. 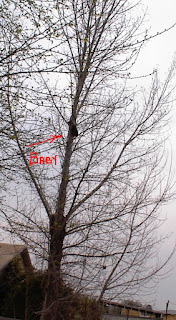 Baby became more and more our cat with regular feedings and sleepovers. She still ruled our little neighborhood by keeping the other "stray" in line and she kept ties with at least one other house. We haven't seen Baby since Thanksgiving. After ten years we can assume someone took her and she is living comfortably at another home, or one of the other animal thugs in the neighborhood got to her. That's the thing about cats - they are connected and independent at the same time. We've tried keeping cats with a similar history to Baby inside and they just can't deal with it. They know the world is out there and they need to experience it. We'll miss Baby coming into cuddle on the sofa, or jumping up to your shoulder from the ground. Ranae will miss her burying her nose in her hair. We'll miss seeing her on the roof waiting for us to come home from work, but most of all, I'll miss her company in the garden. 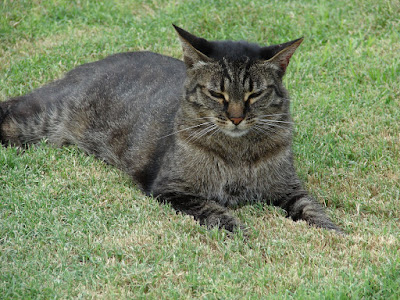 The Weather Cleared - At Least for a Moment

It rained most of Saturday and that was a good time to get a little work done at the office and then go Christmas shopping. It snowed in the mountains around us and Sunday morning we woke up to frost on the ground. The skies cleared and we decided to to try a little groundwork session out back.

We cleaned up the horses and moved the other horses out. We set up a couple of different colors of plastic sheeting, some cones, a few 8' poles and the barrels. We each did a little GW to see how fresh the horses were because, after all, we hadn't worked them in a couple of weeks. Both of them responded very well. Neither Jessie or Dusty kicked up, even during the loping part of LFR II (that's her Achilles heel). We then each took a turn at the stations we set up doing the sending over the different plastics. We had to stand in one place and ask them to do a figure eight around the cones. They had to trot and lope over the poles on the ground that were about 6 feet apart.

Edit: I forgot to add that we had seen the Extreme Cowboy Race and one obstacle was to blindfold their horse and then lead it for about 25 feet. Ranae wanted to give this a try so I got a towel and we tucked it underneath the rope halter and lead the horses. They were pretty reluctant at first, but they trusted us enough to get the job done.

The barrels were set on their sides and Ranae didn't think Dusty would jump them. I asked her if she wanted to try and when she said she did, I tied up Jessie and stood to the side to give her a few suggestions. It was really just a matter of getting her to increase the pressure of her cues at the right time (which is always easier to see by an observer). It didn't take long before he went over a barrel and Ranae had a big grin on her face (she always wanted a hunter/jumper ;>). Dusty seemed to enjoy it more than Jessie. He jumped them with a lot more enthusiasm. She saddled up and I set the poles about 6" off the ground and she did some jumps over that. Then we raised on side of the pole to about 18" and she did some jumps over that.

The days are so short now and it started getting colder. There were still a lot of weekend chores to do so we wrapped it up. We had been at it a couple of hours.

The rain came back again last night. We probably had about a quarter of an inch or more. The paddocks got soaked and so did the horses. It felt good to get out and do something with them.
Posted by John Harrer at 12/15/2008 01:14:00 PM 2 comments: Links to this post

It's time for a little ketchup...

Not a lot of time for the horses over the last week. We had family from Utah, Oregon, and No. Cal come into town and we tried to spend as much time with them as possible. Ranae had the week off, but then caught a cold that slowed her down a bit.

We managed a little grooming time early TG morning. Saturday afternoon we cleaned them up again. The weather was pretty wet the first part of the week then turned foggy and damp. Sunday afternoon cleared up around 3PM and we went out and did a little groundwork. The weekend before we had shot video for GR&C on the Ground Series II. We had twenty five minutes of video shooting the 12 or so exercises. I could have edited it into a decent video, but the raw footage was just painful for me to watch. My cues were sluggish, my energy was too low, my leadership wafted in and out like an ocean tide. So Sunday I focused on trying to make my cues clear and in the right order and bringing my energy up when I needed it. I put Jessie on the 22 foot lead and did some lungeing in a big circle. She did very well for not having worked all week. She was fast in some places but she didn't kick up.

I'm off of riding for the rest of the month. Something is irritating my prostate and I go to the doctor at the end of the month. It's hell getting old. Meanwhile, I'm still working out three times a week at the gym. The only thing I can say is, "Thank god for ipods". It's a good time of year for an equine layoff anyway with the Christmas shopping season upon us and Jessie probably could use a break. And, if I do get to work her I've got lots of room for improvement on my groundie techniques.
Posted by John Harrer at 12/03/2008 11:10:00 AM 1 comment: Links to this post