We got to ride three of the four days of Christmas. Christmas Eve was a brief, one hour ride out to the alfalfa field. We loped around and did a few exercises, but generally just screwed off and had some fun.

Christmas Day we rode in the morning for a couple of hours. It was cool (I promise not to use the word cold anymore, Iowa) but we put on an extra layer and headed out to the development. We did a nice long trot and some loping out there. We practice taking lead and doing some lead changes. Christmas afternoon we had some friends and family over and stuffed ourselves.

Saturday the weather was gloomy and we caught up on chores and decided to go see a movie. Up in the Air with George Clooney was a nice Saturday afternoon flick.

Sunday, we rode our loop backwards. We trotted down the canal out to the big square. We trotted and loped over some construction pipes at the development and came back around the far side of the canal. From there we rode to the alfalfa field and practiced some stops and rollbacks. I shot some video and took a few pictures that I hope to get posted some time this week. End of the year is a bit hectic around here.

THIS is Customer Service

SmartPak is an online merchant for animal supplies. I had used them to buy some bandaging material earlier in the year to outfit a horse first-aid kit for our trailer. Their prices are good and the service was quick.

For Christmas I went to their site on the 3rd of December and ordered a set of five brushes and a grooming bag for my wife. They looked nice on the site. I researched the manufacturer, and found they made a high quality product.

There was an option to have them engraved and I thought this would be a nice touch. The web screen for the engraving process was a little awkward and I plodded through it trying to decide whether to put her name on the brushes or her horse's name. There was a choice of fonts, too. I clicked the "buy" button knowing I should get them in plenty of time for Christmas.

The bag came first, probably around the 10th. I knew the engraving would add a couple of days and sure enough on the 14th there was a small package with one lone, small, face brush in it. What? It didn't have the engraving on it. Hmm. I went to the website and saw I had another tracking number that would be delivered on the 15th and thought, before I called the company, I would wait and see what came. The other four brushes arrived and were engraved very nicely. The brushes just what I had in mind - high quality and the engraving is definitely a very nice touch. I wasn't sure if the face brush hadn't been engraved because of its small size or if I had made a mistake on the engraving order screen.

Not knowing if there was anything that could be done I called customer service. Casey, my representative, listened to my situation, looked up the order, and said, "Let me investigate on our end and talk to our different departments and I'll call you back. We'll make sure you are satisfied."

Sure enough in less than an hour Casey called me back. She wasn't sure what went wrong, but said they would have another brush engraved and sent 2nd day air to insure it got here by Christmas. That's impressive.

It's a crazy time for retailers and this kind of customer service sets a standard. While I've used a variety of online retailers for my horse/dog/cat supplies in the past, this type of service and professionalism requires my customer loyalty. That's a great job SmartPak. Thanks Casey.
Posted by John Harrer at 12/17/2009 11:18:00 AM 1 comment: Links to this post

And Then It Rained

It rained most of yesterday afternoon and evening. It continues to rain this afternoon. The horses pens are pretty soggy. Predictions are for more rain through the weekend. That's good. We need the water. We will be lucky to get any saddle time in this weekend. That's okay. They deserve some time off once in awhile.
Posted by John Harrer at 12/11/2009 01:24:00 PM No comments: Links to this post

Stopped by the vet on Saturday to pick up the paste wormer. We have been on rotating schedule, worming every 4 months or so. It was a quiet day at the hospital and I asked the vet why horses used a different protocol than dogs and cats. I'm not a big fan of giving medications of any sort unless there is a reason. She pointed out that they have been noticing a resistance to some of the wormers and their policy was now to do a fecal before worming. This makes so much more sense to me than "just" giving them the paste wormer.

We chatted some more and I left with the plan of bringing a sample of Dusty and Jessie on Monday morning. Samples collected and analyzed were negative on both horses and we decided we would re-test in six months. The fecal exams were $22 each, a bit steep compared to my expectations, but cost wise it may work out to be very close and it will be interesting to see how often they actually return a positive test.

We also talked about pricing and procedures on having a foal with Jessie. I'm not really planning anything in the near future, but would like to have one her foals. It was very enlightening to find out how much it would cost for the insemination, pre- and post natal care, and I'll add this to the cost of the stud and the extra housing needed for the foal and see what happens. In reality, and I know this is heresy, but one horse is really enough...for now.
Posted by John Harrer at 12/08/2009 10:10:00 AM 1 comment: Links to this post

It's been a couple of weeks since I've posted because we've been working on the same things. We got a short ride in on Thanksgiving Day, a training ride in the back on Saturday, and a trail ride that Sunday. The same schedule was followed this last weekend. We trained on Saturday and rode out on Sunday. I've been working through the RWC Series II exercises. It's been a challenge because I really want to do these exercises exactly right. I've been wondering if I've been a bit lax in completing some of the exercises. There are times Jessie doesn't seem as light as I think she should be and I think she still likes to drag me around where she would like to go instead of following my leadership (as suspect as that might be).

Sunday was absolutely perfect weather for riding here. We headed off down the street to our alfalfa field. I had the camera and took a few pics. This is one of the streets we ride down to get to the field. 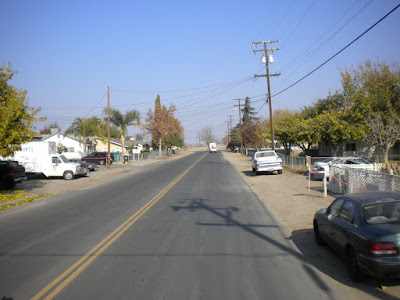 From here we ride by a truck storage/parking area. There are several horses stabled here. There is a large Hispanic population and many of them use this area. 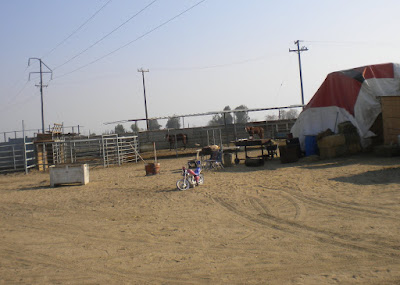 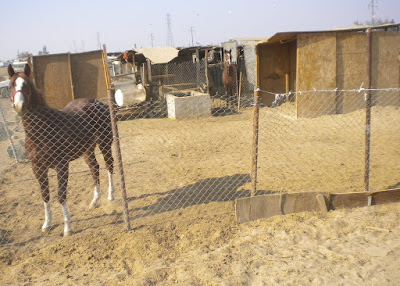 We ride through their lot and out the back end where this concrete and trash has been dumped. From here we head in the direction of the city farm. This is an impoverished part of our town and has been that way for some time. Not sure why this is, but people dump a lot of garbage out in these areas. It offers us unnatural trail obstacles even though it looks like shit. 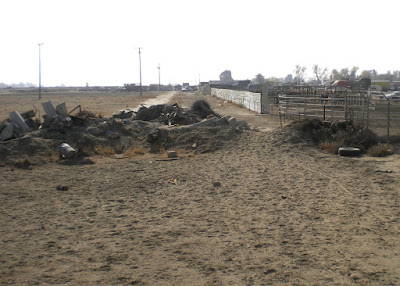 Cottonwood Villages is a housing track that never even got started. We occasionally ride in there. The ground is good and flat. 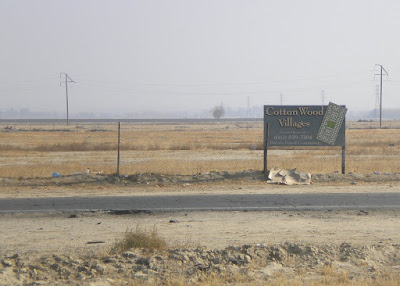 The city farm grows alfalfa crops. There is a water treatment plant nearby that's pretty smelly. We try to avoid that. There were a couple of dozen beehives being stored at one end of a field and we rode between the bees and the trash dump on the other side of the road. Having the bees buzzing around us is a pretty good de-sensitizing test. 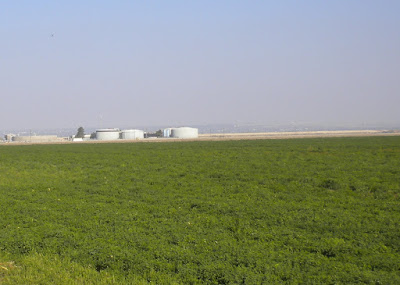 Water Treatment Plant in the distance

Why someone would haul their sofa here instead of having the city pick it up for free is beyond me. Maybe they didn't want to haul the palm frons away too. 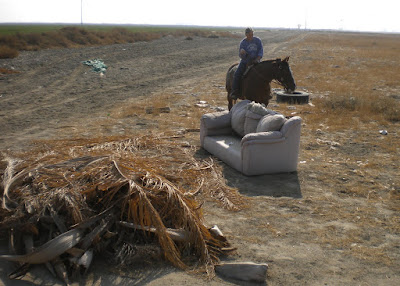 One of the saddest sites we've seen in awhile. Someone dumped their dead colt here. 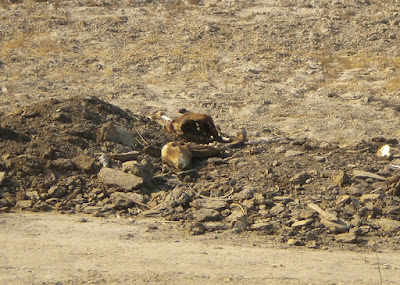 Hard to say how long its been there. There are always a number of animals dumped out here in the "sticks". We saw a sheep, a calf, and occasionally a dog or two.

There are some positive images like this kestral watching us from a power pole. 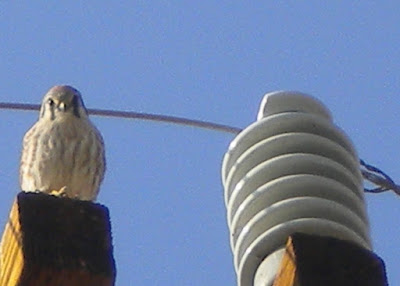 I took some video too. I didn't spend any time editing it. First is Ranae and I doing some loping in the alfalfa field. You can see her nice WP lope and good stop followed by cue to lope Jessie and her ignoring me. You might see though that her lope has gotten much slower. The stop is sloppy as she turns to face the camera.

I think next is us riding by the beehives with the garbage on the other side. All the video was shot from horseback so blame Jessie for the bounces. Last, is the ride by the egg farm. These are long sheds that house thousand of chickens clucking on the other side of the plastic sheeting. Another good urban trail riding obstacle.